Heritability is a numerical concept initially used by Fisher to estimate the contribution of genetic variance to phenotypic variance. The concept was of particular use to classical quantitative genetics and plays a role in the “Breeder’s equation”. If

is the genetic variance, and

is phenotypic variance, then (broad) heritability,

. We should note that in the most naive models of phenotype development,

There are a few purposes for which heritability estimates and uses are valid. First is the use of heritability in the breeder’s equation to estimate the response to selection of a particular trait;

, which is response is a function of heritability (

) and strength of selection differential (

. This equation comes into use in both plant and animal agriculture where environments of animals are systematically controlled and heritabilities are somewhat accurately estimated. What the $h^2$ here recapitulates is the reproduction of traits among offspring; how developmental systems as a whole transmit similar traits. However, we should also note that the related fundamental theorem of natural selection seems to fail under the presence of ecologically and ubiquitous interference competition. Wim Crusio noted in his commentary on Evan Charney’s demolition of behavioral genetics that human studies that estimate heritability are much less controlled than that of animals, and that despite the fact that environmental variation in minimized, heritability estimates in animals are systematically lower than in humans.

There are a number of individuals out there that reason from a heritability statistic and a group difference to a genetic group difference; if individuals differences in traits (IQ) are ‘attributable’ (purely in a statistical sense) to genes and racial groups differ in traits (IQ), then isn’t it reasonable to conclude that the gap between racial groups in these traits is partially genetic? This is a fallacy that Lewontin identified decades ago by positing a thought experiment. Suppose we have two plots growing corn. We have a genetically variable set of seeds (all of the same strain) and randomly assign them to each plot. In the first plot we have a uniform environment consisting of high lighting, fertilizer and water, while in the second we have a uniform environment consisting of the absence of lighting, fertilizer and water. Because the environments are uniform in each plot, the heritability of the height of the corn in each plot is respectively

, but the genetic difference in the height between the plots is exactly 0. 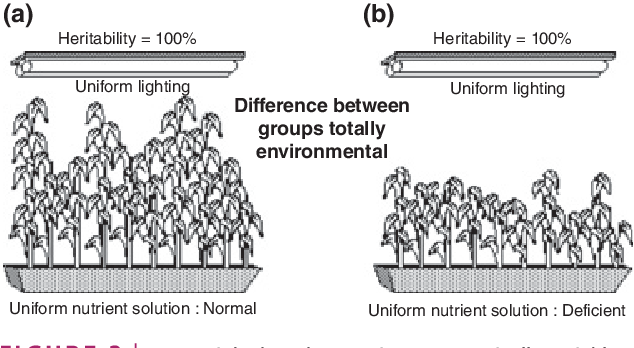 So heritability doesn’t inform us about malleability or the cause of group differences, but surely it must inform us about the relative contribution of “genes” and “environments” to a trait, right? That one is also false: the question of whether ‘nature’ or ‘nurture’ contributes more is a question that fundamentally doesn’t make sense. As an analogy, suppose Jack and Jill are filling up a bucket together. Jill brought the bucket to their spot and Jack brought the hose. They fill up the bucket together. The question “how much of the water is attributable to Jack vs Jill” is not just the wrong question, but altogether absurd! Heritability has its meaning: nothing to do with the “nature”-“nurture” question.

Obviously since heritability has played such a role in the “nature”-“nurture” wars, people must have been calculating it somehow. The way that heritability is typically estimated is by using the quasi-natural experiments of adoption, twins and families. Because we know the proportion of genes that twins shares, that adopted children and adoptive parents, and that of other family relationships, we can estimate use these relationships to calculate heritability.

Let the intraclass correlation between pairs of MZ twins be

and the intraclass correlation for DZ twins be

. Then since monozygotic twins share 100% of their DNA, we can posit an environmental factor $c$ that both twins in the dyad share. Subsequently,

. On the assumption that DZ twins have the same level of environmental similarity as MZ twins, then we have

. We can solve the subtract to get

. That’s the ‘classical twin model’ and Jensen’s estimator for

What’s important to note here is that there a number of assumptions in these calculations. First, as we noted above, is the assumption that MZ twins share the same level of environmental similarity as DZ twins, which we have good reason to believe is false. Second is the absence of gene-environment interaction. When the effect of a genotype on the trait varies with different environmental variables, we have to introduce a covariance term into our model;

. This makes the calculation of heritability much more difficult. Other assumption violations include the presence of gene-environment correlation, dominance (in the presence of which estimates based on MZ and DZ twins are upwardly biased), epistasis and associative mating. All of these complications prevent the calculation of heritability without large amounts of family data.

The history of the heritability of IQ is a long (and sordid) one for it is full of fraud, fights and discrepancy. Published estimates have ranged anywhere from 0 to almost 1, with nearly every number in between. The initial work by psychologists in the 1920s and 1930s typically yielded higher estimates (barring certain papers) ranging from 60% to over 80%. Jensen’s infamous paper concluded an estimate of around 80%, while the MISTRA data was calculated as 70%, while other datasets have not found estimates significantly different from 0%. It actually turns out that purely environmental models fit two times as well as the typical models because of the presence of assumption violations.

The most robust estimates I’ve seen that take into account all family data (parent-child, twin, adoptee, etc correlations) to produce a single set of estimates. These studies are best exemplified by Plomin’s assessment (based on the Bouchard and McGue data review), the Morton group’s estimates, Feldman and Cavalli-Sforza’s work and the assessment in Scientists Respond to the Bell Curve.

The Morton group published a set of papers using path analysis and other complex models (including cultural inheritance) to estimate the heritability of IQ. Cloninger, Rice and Reich (1979a) (see Rice, Cloninger and Reich (1978) for an introduction to their methodology and Cloninger, Rice and Reich (1979b) for an extension to different family structures) estimated a heritability of 32.6% for IQ, with a cultural transmission value of about 27.2%, and a non-transmissible environment value of 30.9%, with a gene-environment correlation of about 9.3%. They concluded that the DZ-MZ EEA is empirically untenable for their data. The group published another paper Rao, Morton, Lalouel and Lew (1982), finding estimates of heritability varying from 31% to 34%.

Chipuer, Rovine and Plomin (1990) also carried out an analysis of the existing familial data in a 1990 article and concluded that broad heritability was about 51%, with 32% additive and 19% nonadditive.

Feldman and Cavalli-Sforza were the originators of models of cultural transmission and gene-culture coevolution in a series of papers [1] and demonstrated [Cavalli-Sforza and Feldman (1973b)] that genetic models could also be explained by vertical cultural transmission models. In a 1995 paper, Otto, Christiansen, and Feldman (1995) applied their models to IQ data and got estimates of heritability that ranged from 29% to 42%.

The ‘giant’ meta-analysis of all twin studies, Polderman et. al (2014), found heritabilities of intelligence in the range of 47% to 55%.

Let’s take a pause. Are these estimates any good? I think they’re the best we have. I still don’t think the computation being performed is of a very meaningful number, but there are still cautions for those who believe in the $h^2$ cult. First is the fact that we have good reason to believe that the estimates of twins reared apart in these studies are anything but “apart” and have substantial environmental correlation. Even more, only one of these studies considered the possibility of gene-environment correlation, none considered gene-environment interaction, nor were things like heterogeneity taken into account.

Whenever one references the familial literature showing estimates of heritability much lower than the oft-cited “80%”, the inevitably response is to cite evidence from the “Wilson effect” or the purported observation that the heritability of intelligence increases linearly throughout childhood. The only problem is: the majority of these so-called ‘results’ are based on the known flawed twin estimates of heritability. When we look at the data with a more finely grained lens, we don’t seem to get the same results. Rao, Morton and Yee (1976) used path analysis to estimate genetic and cultural heritability and found that it is in fact cultural heritability that is larger for adults and genetic heritability larger for children. Devlin et. al (1997) also tested the age-effects model and found that it is inferior to the other models they tested. There is also recent data that shows the correlation of adoptee to adoptive parent IQ increases longitudinally, rather than the previously assumed decrease.

Even more, even in the case that a so-called ‘increase’ in heritability is observed, there is little reason to worry. First is that heritability estimates taken at different times are incommensurable and cannot be used to compare the relative influence of ‘genes’ and ‘environment’ (‘nature’ – ‘nurture). Second is that the fact that heritability might increase could be an artifact of test construction. And finally, it could be the result of developmental mechanisms where induced gene-environment interactions and gene-environment correlations emerge over time and inflate the so-called ‘heritability’ component.

What is heritability? As Turkheimer (1998) puts it, “Heritability and psychobiological association cannot be the basis for establishing whether behavior is genetic or biological, because to do so leads only to the banal tautology that all behavior is ultimately based in the genotype and brain.” Heritability has very limited uses. When estimates are made properly using the largest and most robust sets of data with more advanced computational models, we find that the so-called “80% heritability” of IQ is nowhere to be found.

2 thoughts on “Heritability of IQ”